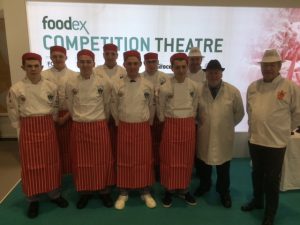 Conor Reynolds of M&W Farm Meats Portadown, Northern Ireland is the UK’s best young butcher beating six other elite apprentice butchers on the eve of his nineteenth birthday at the final of the Premier Young Butcher Competition organised by the National Federation of Meat and Food Traders (NFMFT) and hosted by William Reed Business Media at Foodex, Birmingham NEC on Monday (16th) this week.

In just under six hours of intensive competition entirely filmed by Flicker Productions for a BBC 1 six-part documentary to be screened later this year. Conor proved superior in the six-category competition taking second place in Seam Butchery and a string of firsts in Ready to Eat, Stuffed Roast, Barbecue, Kitchen Ready and Display.

In a competition with a clear winner and second place too difficult to call 19 -year-old Leeds City College Level Two Butchery apprentice Daniel Binns with a Level Three in Agriculture working for J Brindon Addy in Holmfirth West Yorkshire took the Runner Up position. Getting second place for Barbecue and coming third in each of the Ready to Eat, Stuffed Roast, Seam Butchery, Kitchen Ready and Display categories.

Speaking at the presentations, South London butcher and NFMFT Immediate Past President Jim Sperring said “It’s great to see so much talent demonstrated by young people. They are a credit to themselves and the trade and I’m sure they all have great futures ahead of them”!

Presenting the finalists with certificates, medals and trophies were sponsors led by the Master of the Worshipful Company of Butchers Geoff Gillo, Chairman of the Institute of Meat Bill Jermey and Arwyn Jones of Cambrian Training. Other sponsors unable to be represented but accredited were Dalziel, Quality Meat Scotland, RAPS UK and Weddel Swift.